This month at Alamance Parks, Special Olympics Alamance County held two separate local basketball tournaments. On February 4th all of the Special Olympics athletes in elementary and middle schools met for a day of competition and games. Project Unify students (typical students that buddy up with SO athletes) are included in the competition and are part of the three athlete and two Project Unify students teams.

The day included tournament competition, individual skills competition, and Motor Activity Training Program for athletes with limited mobility. We always manage to get in some dancing and parachute games as well! This year we were blessed with a grant from Impact Alamance that allowed us to include a dozen additional game options including a giant 12-foot inflatable basketball goal and tug-of-war!

The scene was repeated again on February 11th for the local high schools where the emphasis was definitely on some serious basketball. 21 teams competed in 7 divisions with over 150 athletes and Project Unify volunteers. We all had time to sit down to a lunch including McDonald’s burgers, chips donated from Lowes Foods, bananas from Steve’s Garden market and ice cold water!  It was an awesome day and all agreed it was great to get a day off school where we could exercise and see friends from around the county.

Thank you to all who volunteered and helped make these two events a complete success! 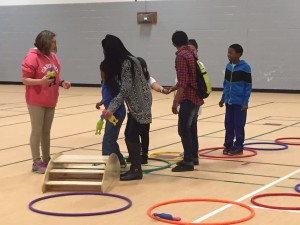 Help Create a map of free WiFi in Alamance County!